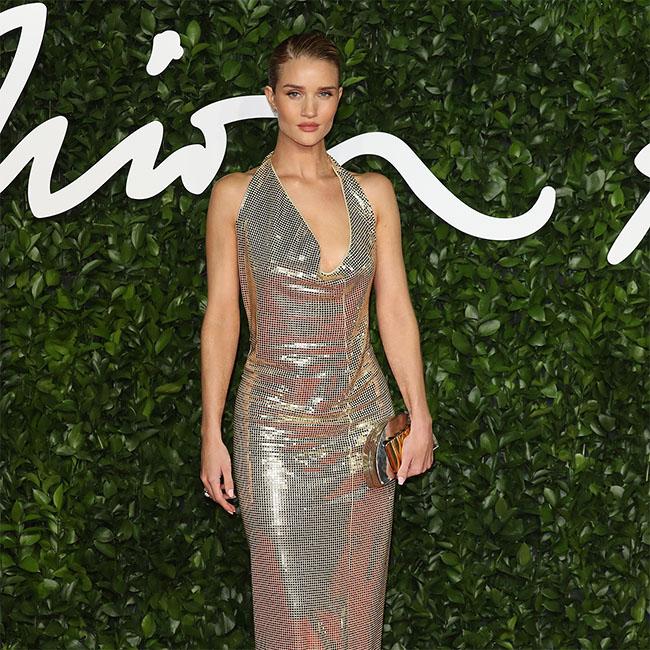 Rosie Huntington-Whiteley spent the last month of her pregnancy walking around naked.
The 32-year-old model admitted she “enjoyed herself” and didn’t worry about her food intake when she was expecting her and fiance Jason Statham’s son Jack, now two, resulting in her gaining 55lbs but enjoying the “magical” changes to her body.
Speaking to Ashley Graham on her ‘Pretty Big Deal’ podcast, she said: “Listen, I enjoyed myself. I let the reins go. It’s a new experience, so you’re kind of like, ‘Well, let’s see how this goes.’
“And six months in I was like ‘What! Like, this is crazy’. It was an intense journey and the same thing. It was so magical to see.
“Towards the end I basically walked around naked for the last month. At home, I was in the pool all day and I just walked around and I was like f**k it. Clothes don’t fit anymore, they don’t look cute.
“By the end I just felt really empowered in my body, but it took a minute to get there.”
But after giving birth, Rosie didn’t lose weight as quickly as she expected it to and found the months afterwards “very humbling”.
She said: “It just took so long to see that weight shift.
“I’ve had girlfriends who’ve lost it in two or three months, there was that bounce back. For me, I breastfed for six months, I didn’t lose a pound. I breastfed and ate so much because your starving and I would just eat, eat eat…
“I would look in the mirror and I was like, ‘I have 35 to 40 pounds to lose.’
“And I go to the gym, go to the gym, go to the gym. It’s not falling off, it’s not coming off, and it was very humbling for me, because having had a certain body type for most of my life …
“I will say working out in the gym and looking back at myself and feeling like sh*t, I was like, ‘Now I understand how hard it is for some people to get to the gym.’”
Rosie admitted her experiences left her feeling guilty about previously advising people to lose weight by going to the gym regularly.
She said: “I cannot tell people how to feel about their bodies, because everybody has a different experience.”

How To Start Homeschooling Your Child, A Step-By-Step Guide

The Top 5 Survival Tips for Motherhood

6 Tips For Raising An Independent Child