Back to being partially physical for the first time since the pandemic broke out, the Spring/Summer 2022 Fashion Month closed with a number of spectacular shows in Paris. Exploring new formats and themes, some of the industry’s biggest players wowed the fashion crowd with new looks and trends that many can’t wait to wear next year.

Balenciaga took the unconventional route and showcased its collection through an episode of The Simpsons. Chanel celebrated the ’80s and ’90s with logo swimsuits, while Miu Miu revisited the trend of low-rise bottoms from the ’00s. Elsewhere, Jonathan Anderson played around with fun motifs in garments and accessories for Loewe, while Nicolas Ghesquière presented 19th century-inspired silhouettes for Louis Vuitton.

Read on for some of the best shows and top runway trends from PFW SS22.

Under Demna Gvasalia‘s creative direction, Balenciaga once again had one of the buzziest shows in Paris. Instead of a physical runway, the designer created a one-off episode of The Simpsons. The 10-minute clip stars the residents of Springfield including Homer Simpson, who writes an email to Gvasalia asking him to send a dress to his wife Marge for her birthday. The creative director later invites the whole town to model his newest collection, with Bart, Lisa and more strutting down the catwalk. Along with the animated video, the SS22 presentation was staged on a real-life red carpet featuring the house’s friends, atelier staff and celebrities like Cardi B and Elliot Page. 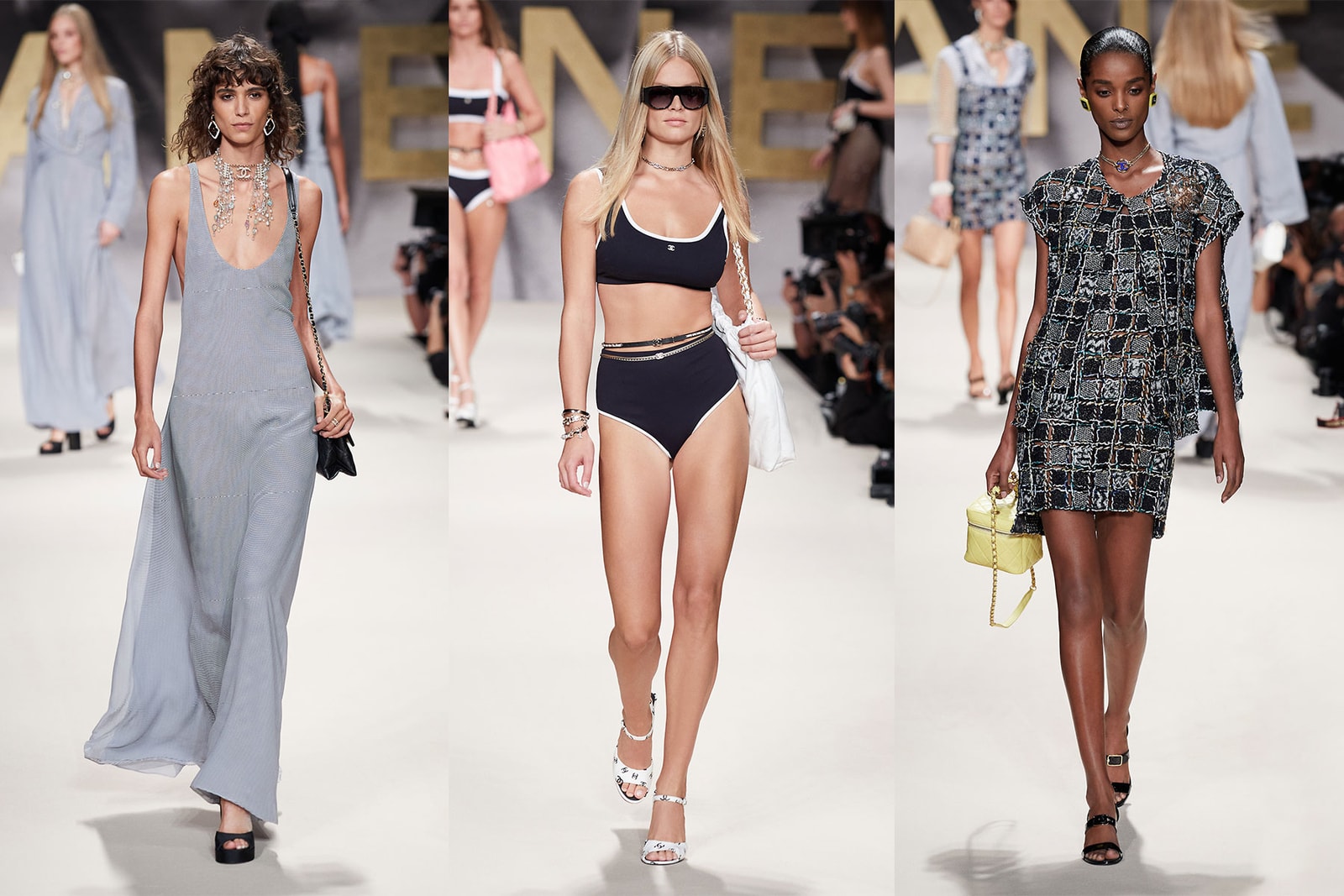 For Virginie Viard, this season was all about celebrating Chanel’s brand DNA that is deeply rooted in photography. In the show notes, the designer talked about the late Karl Lagerfeld and how he used to shoot fashion campaigns himself. “Today, I call upon photographers. I love the way that they see Chanel. It supports and inspires me,” she said. Channeling that inspiration, brand ambassadors like BLACKPINK member Jennie and Lily-Rose Depp are seen holding a camera in a set of teaser visuals lensed by Inez & Vinoodh. As for the show itself, Viard paid homage to Lagerfeld’s early ’90s Chanel collections with double C-branded swimsuits and briefs. The brand’s classic tweed suit was reimagined with sequins as well as pastel yellow and pink knit. 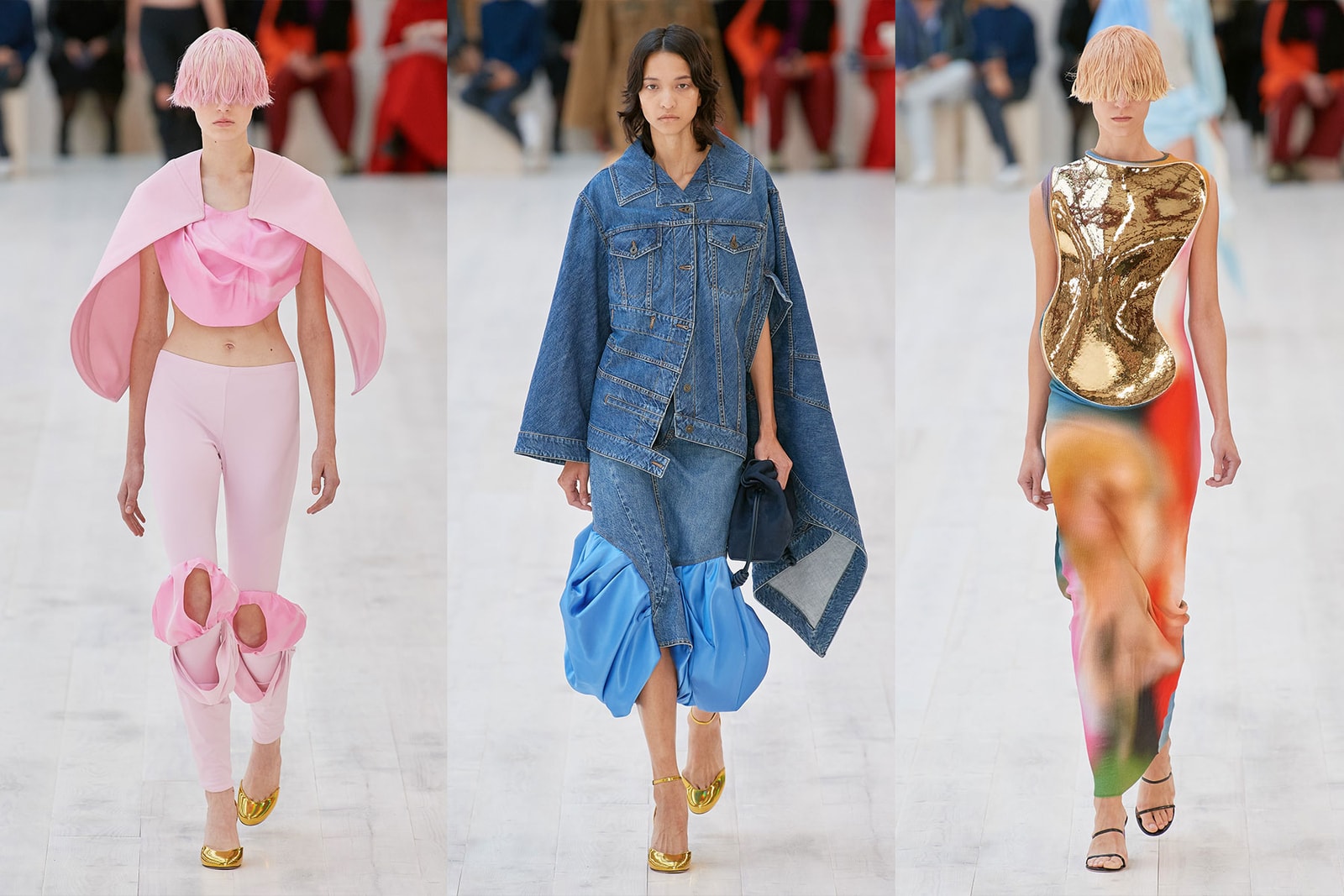 Loewe’s SS22 collection was described to be “neurotic, psychedelic, completely hysterical.” Playfully experimenting with draping, sculpting and color, Jonathan Anderson created a range of unconventional silhouettes. Oversized denim shirts were worn backward and dresses were adorned with metal plates. Pastel blue and pink colors took over top-and-bottom sets with cut-outs at the knees. Accessories were the highlight of the show, with nail polish and cracked egg motifs replacing the heels of sandals, while the Flow runner was given a jelly makeover. 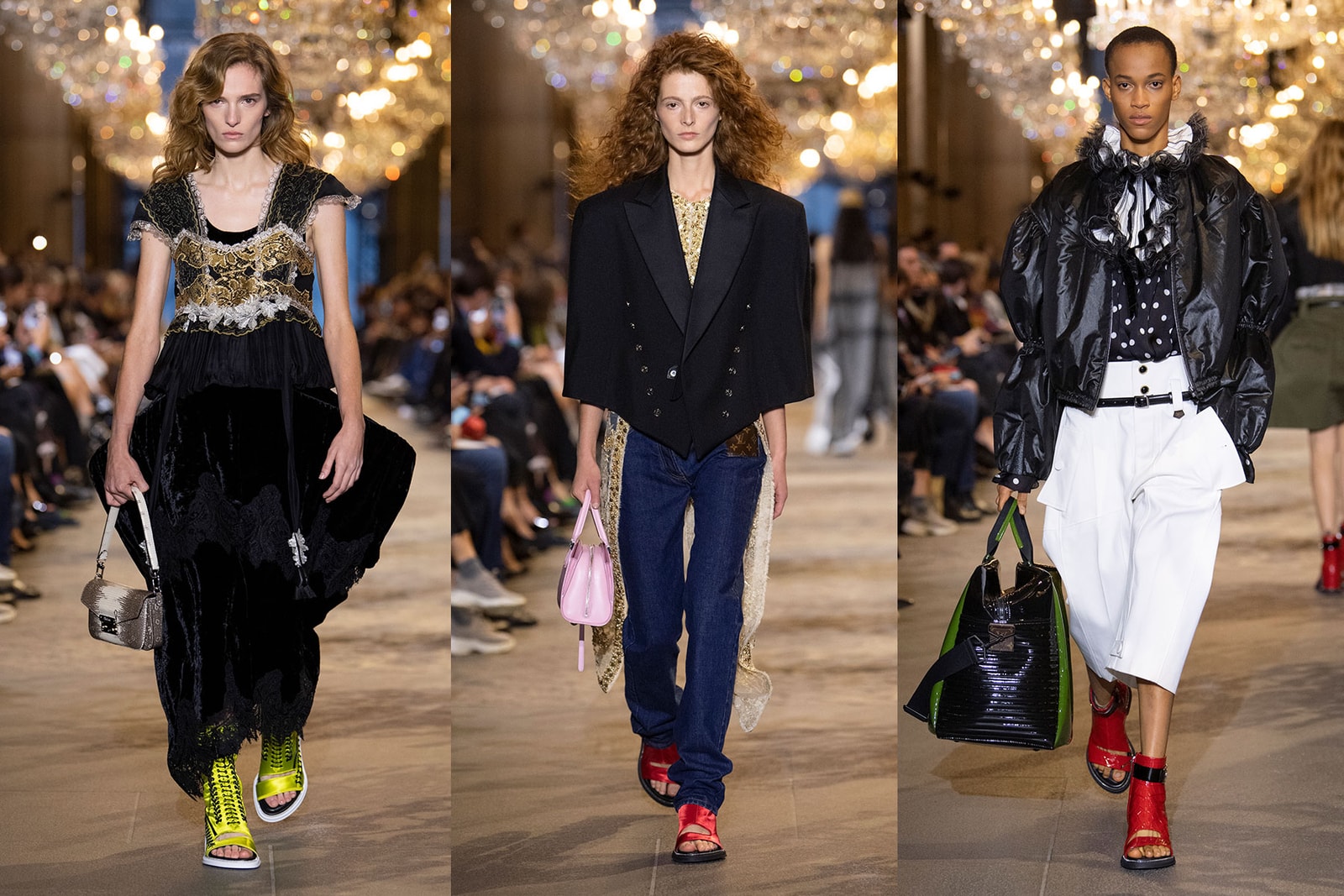 For his latest Louis Vuitton show, Nicolas Ghesquière decorated the Louvre Museum with chandeliers. Exploring the concept of time, the collection traveled back sartorially to the 19th century, as pannier dresses and ornate embellishments dominated the runway. Elements of juxtaposition were seen through looks like jeans styled with slip dresses, and denim jackets paired with glossy trousers. The outfits were accessorized with Art Nouveau-style sunglasses and headpieces along with bulky bags and lace-up sandals. 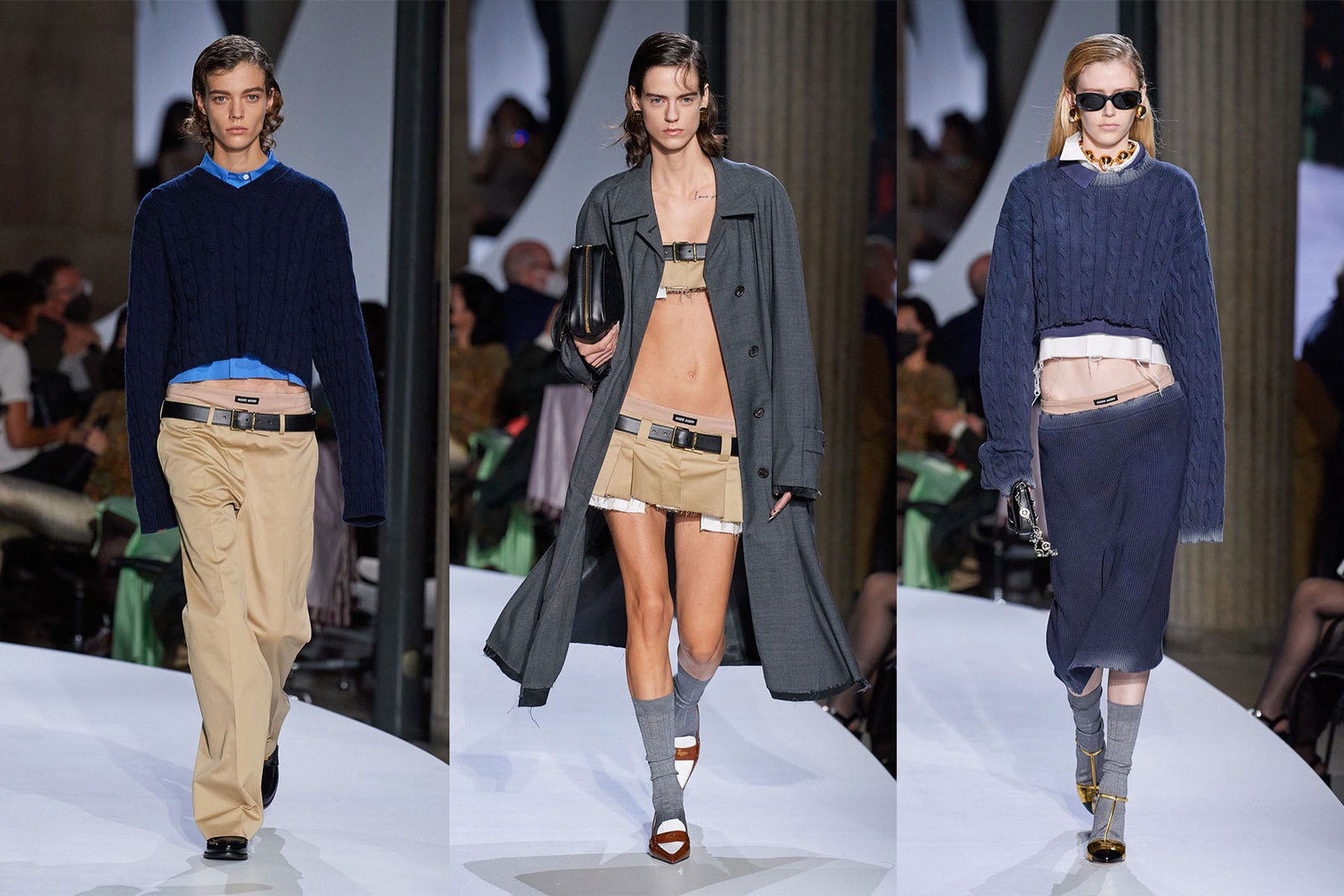 Miuccia Prada delved into office wear for Miu Miu’s SS22 range. Throwing back to the ’00s, the collection was dominated by low-rise bottoms and micro-mini skirts. Styled by Lotta Volkova, models strutted down the catwalk in cropped sweaters and bandeaus barely covering the bust. Knee-length shorts and coats were given a corporate-casual look with frayed hems, contrasting with the floral dresses that appeared later in the show. In the show, Miu Miu also revealed an upcoming New Balance 574 collaboration in beige and white colorways.